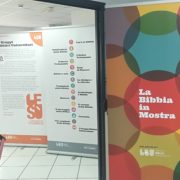 From 27 until 29 March 2018 the “Bible on Display” event took place at the Magna Graecia University of Catanzaro. The exhibition was carried out in the Department of Medicine and General Surgery, offering an overview of the Bible, its contents, reliabilty of the text from a historical/scientific point of view, the invaluable message of life offered by Jesus, its evolution through printing etc.

It is very easy to set up, as roll up banners are used. The exhibition can be shown in any kind of venue, preferably sheltered.
During the event organised by GBU Catanzaro, a brief speech was given by Giovanni Donato which aroused interest among the students. Questions, doubts and puzzlements were raised, dialogue and debate were prefered and some wanted to go deeper with the Bible message and join the meetings held by students in the local GBU group. Bibles in a variety of languages were also exhibited and New Testaments given out.

Even though the initial time frames for organising everything were quite tight, we are pleased to have been the first group in Italy to have used this resource made available by the national GBU. We can confirm that it involved an event which offered a certain degree of visibility, even though we would suggest being able to hold the exhibition for a few more days, perhaps associated with some sub-events (aperitives, seminars, video projections etc.).

From an academic perspective, without necessarily knowing what each single person believes, every student can without any hesitation, approach the intercultural spaces and vast landscapes offered through the Bible. A lot of curiosity due to this can already be identified in the exhibition.
From a Christian perspective on the other hand, God does not hold back from blessing all those who strive to honour the message contained in His word. All round the world, even in the most extremist countries, thousands of students and people have been able to read about, reflect on and be transformed by the huge sacrifice of love accomplished by Jesus and his life teachings. It is never work in vain.

Our desire is that students in every university have the possibility of knowing what the Bible text is and what it says, getting to know its main character and being able to debate it and freely express themselves without any impediment.