We are very happy to be able to share with you the things that have happened here in Padua over the last few months. As you may already know, for a few years now we have been lacking a stable GBU group at the University of Padua. I found this out in the last years of High School, when I was considering the various universities nearby and hearing more about the various GBU groups in existence. Along with a sense of sadness to not have found anything a desire grew in my heart to start something myself, a desire that only began to take shape with the start of this academic year when a good friend (who had been a co-ordinator of a GBU group for years in Pisa) put me in contact with Chris.

Near the middle of October, after a few weeks, we met to see what we could do and to pray for the birth 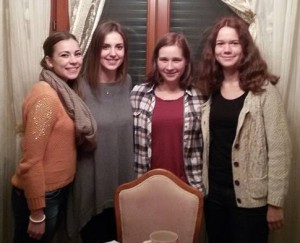 of a new group. In the meantime, we were joined by Emily, an English girl in Padua for Erasmus. We thank the Lord for how he has guided every thing in the course of this semester, what seemed uncertain and difficult He has made possible! At the first meeting there were four of us, we were joined by two other girls: Jessica and Gloria. None of us had had any experience with the GBU, after the initial bewilderment and shyness our first meeting continued with great serenity but was also very exciting, we had the opportunity to get to know each other a little, to share our testimonies and think about how to organise the meetings of our little group. Finally something concrete was born, a response to our prayers and hopes and once again I could see how the Lord does not fail to give an answer to those who want to serve Him. We have decided to study the Gospel of John together, as it is a great place to start thanks to the richness of the verses it contains. After a few weeks we were joined by three more students (Marco, Elie and Naomi) who started to frequent our meetings. Their presence has been a further encouragement and together we have continued with our reading and meditation of John. END_OF_DOCUMENT_TOKEN_TO_BE_REPLACED