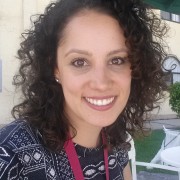 Carol is from Brazil, but her heart is here in Italy.

She was part of GBU in Brazil while studying Philosophy at the Universidade Federal de Minas Gerais. In 2010, she spent 10 months in Rome as part of her placement abroad, and there she served the local GBU and met Stefano. After going back to Brazil for a period of time, she returned to Italy to marry Stefano and study for her Masters degree in Philosophy at the University of Bologna, the city where she now lives.

After having graduated and attended the GBU in Bologna, Carol began serving GBU as a member of Staff in Training in 2015. She attends Nuova Vita Evangelical Church and is involved in its local ministry. Carol is enthusiastic about the way God has called her to share the Gospel among students and she loves the university environment. She is passionate about art and philosophy, and enjoys watching good movies.

Do you want to support the contract of Carol Rocha?