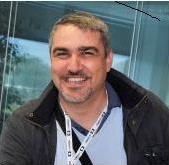 Davide is from the Italian region of Puglia, where he was born in 1970, but has spent more than half his life in Rome and so he also feels Roman by adoption.

His degree program involved the study of the relationship between faith, religion and culture from anethno-anthropological perspective. During his university years, Davide began to serve the GBU in Rome, subsequently becoming a Staff Worker and working with the GBU group at La Sapienza whilst overseeing the running of the Sala di Lettura GBU (the GBU Reading Room).

He has been part of the National Board since 2010, succeeding Giorgio Borla as Chairman in 2015.

Davide works for a multinational organization that produces medical and surgical equipment and software for the treatment of patients affected by neurological and heart diseases or other critical conditions. His job has made him more sensitive to people in this condition and expose him daily to pain and suffering and the treatments available.