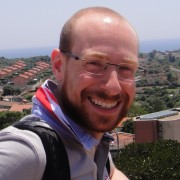 He was born in Ragusa in 1987 and lived in Sicily until 2011. On that year, he moved to Siena to finish his studies in Economics and Managements. In Siena, he regularly attended activities of the local GBU and when he attended the Oxford Brookes University, he joined the activities organized by the English UCCF (Oxford Brookes CU).

His faith journey started in Vittoria, the city where he came from, where he accepted the Lord as his personal Saviour at the age of 18. The following places where he travelled for study and work have been fundamental for his spiritual growth and helped him understand the importance of sharing the Gospel among students. At the beginning of 2015, he starts to work in a software company as a costumer adviser, first in the management control area in Catania and, more recently, in the economic accounting of the branch in Bologna.

He started to work on GBU Board in 2015. For him this was a wish come true, since he has always wanted to be part of the organizations as a former student.