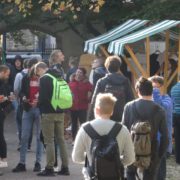 Every year in Slovenia, ZVEŠ the local GBU/IFES movement organises a festival in memory of Primož Trubar, a very important cultural figure for Slovenia. This is because after his conversion to the evangelical faith, actually during the Reformation years, he wrote the first books in the Slovene language.

This year the Italian GBU sent a small delegation of students, all from groups in the Veneto region of Italy. This is already a reason to praise God, because a few years ago there wasn’t even one GBU group in all the region, but today there is a good three groups!

One of the main reasons for the trip was to help the Slovene students in evangelistic activities; during the day we had conversations with students, we tried to make new contacts, and most of all invite people to the evening events. There, an artist commented on an art piece painted during the Reformation times with interesting spiritual discussion points. And that wasn’t all, being there was also a way to encourage the few students who work for the gospel in Slovenia: in Ljubljana there is only one student and one staff, and between all of the universities there are about five students! They really thanked us for our presence, they were enthusiastic that we were there.

We also encountered a culture very different from ours, even though we are geographically close. We tended to find students more introverted compared to those whom we’re used to, so it was a bit more difficult to start conversations. Although this difference was noticed less in Koper, here the presence of Italians is much stronger, and so in effect here we felt more ‘at home’. Some students we talked to were catholic, even if probably the culture is more secular than ours; and certainly you can’t forget the minority of Orthodox and Muslims, whom we didn’t have the opportunity to be in contact with. One thing which struck me was the deep sign that the civil wars of the 90s had left in the collective memory, particularly among the older people they frequently mention Yugoslavia. Even if the students whom we met grew up after the conflicts, it is always a fundamental aspect of the cultural context in which they move.

We Italians also had opportunities to meet to study John 12 and reflect on the content of our message: Jesus, the light which reveals God and whom God has sent into the world to give glory to himself. Through the death and resurrection of the eternal son, equal with God but also in submission to and obedient to his will. The Gospel reminded us that it is no surprise when Jesus is rejected, since also his peers and compatriots did, but also whoever believes and sees the light can only do so by the grace of God.

It was a great experience for everyone, personally I returned home determined to build more relationships with the students around me, aware of the enormous privilege which I have to be a servant and friend of the Only True God.

Hold Firm to the Trustworthy Word